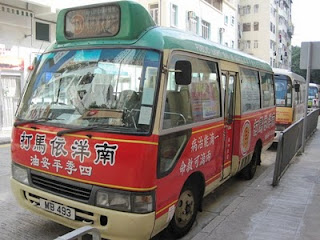 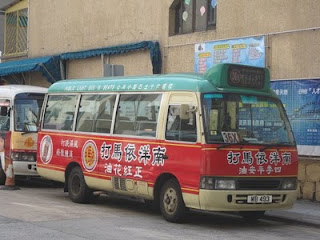 For the most part, I love Hong Kong's public transport system. It's convenient, quick, and there are many different kinds. There's big buses, mini-buses, ferries, sampans (little ferries), taxis, the MTR (subway), and the tram (trolley). So many options.

I've had several people ask me if I thought Hong Kong was more convenient than the last place I lived. Well, not really. Maybe if I lived in another city I could say that. For a city, it is definitely convenient. But I don't think you can really compare it to a small town, or driving for that matter, because cars will always be more convenient. I'm not saying that public transport is bad, not at all. I think it's great to save gas and walk and take buses and all that. But it's a simple fact that in a car you go straight to your destination. You don't have to wait for your car to arrive, you don't stop for other people to get on (unless you're picking up hitch-hikers), you don't have to rely on the driver's speed. In Canon, it took me seven minutes to get to school and nine minutes to get to work. Here, I always leave at least forty minutes early for wherever I'm going. Just something to think about.

But now that I am car-less, I have fully embraced the range of transportation options here. I ride buses, for the most part. I pretty much use all of the options (well, taxis I only use when I'm with other people, but I suppose that still counts). The MTR doesn't reach out to where I live, although it should be here in about five years. Hooray. My favorite mode of transportation is mini-bus, since there's a stop just three blocks from my house. I use big buses too, but then I have to walk up a ton of stairs to get there. Yes, it's good exercise, but it's hard to make myself want to do it, so I stick to when I have to do it, like on Sunday mornings.

Thankfully for me, I work in Causeway Bay, where one of the min-buses goes! Usually it's a fairly simple matter of hopping on the bus and then jumping off at the gold dragon, yelling "Bassi cham, m goi" to tell the bus driver I want to be let off at the bus stop. Usually it's fine. Not yesterday.

In the middle of the day, think ten to two, traffic is light. There's no traffic in the tunnel, and the bus usually makes minimal stops to pick people up. Although I've been leaving forty minutes before work just in case, it generally only takes fifteen minutes to actually get there. I like to be safe, though. Yesterday I was running late and only left a half an hour early. Bad idea.

I know, I know, I should always expect something to go wrong. But the last ten times or so it's only taken fifteen minutes to get there! How was I to know I'd have the one mini-bus driver doesn't drive like a racecar maniac? Still, it was my fault.

I got to the stop at twelve, and no bus was there. That's not normal, but it does happen sometimes. Finally, the right bus pulls up and I hop on. Three other people get on behind me and we sit. These buses can hold sixteen people, but during non-traffic hours, three is enough for a driver to go. Not this one. He waited for ten minutes to see if anyone else would come. Then he slowly drives off down the street. We kept stopping to pick up more people, which is also normal, but not THAT many people at that time.

Finally, we were full, so I thought that he would speed it up. No. We were the absolute slowest vehicle on the road. EVERYTHING was passing us. Trucks, cars, big buses, vans, other mini-buses. I was like, "What is wrong with this guy?" We come up to a green light. Most people would accelerate when you see a green light. But no. This guy SLOWS DOWN! By time we're at the stop it's yellow, so of course he stops. Thanks.

The rest of the way there I was verbally yelling, "Drive faster! You're not a ninety-year-old woman! See how everything's passing you? Doesn't that tell you something?" But of course I was polite and kept quiet. He probably wouldn't've understood me anyway.

We finally made it out of the tunnel and to the golden dragon. I made it to work, but I was five minutes late for a lesson. A couple students and teachers told me that this school is flexible so they don't care that much if I'm five minutes late, but I care. I don't like to keep people waiting, especially if they're paying for my time. Sigh.

I guess I just need to make sure to always leave forty minutes early. I suppose I can take a book. Or steal a mini-bus and drive it myself.
Posted by Lolai at 9:44 AM