The Hill of the Nightmares

Recently I took a field trip with my Cantonese class to the Hill of Nightmares.  Well, it's actually called 10,000 Buddhas.  A lot of them are stately and beautiful, but some of the Buddhas would fit right in to a Tim Burton movie.  I mean take a look at these guys. 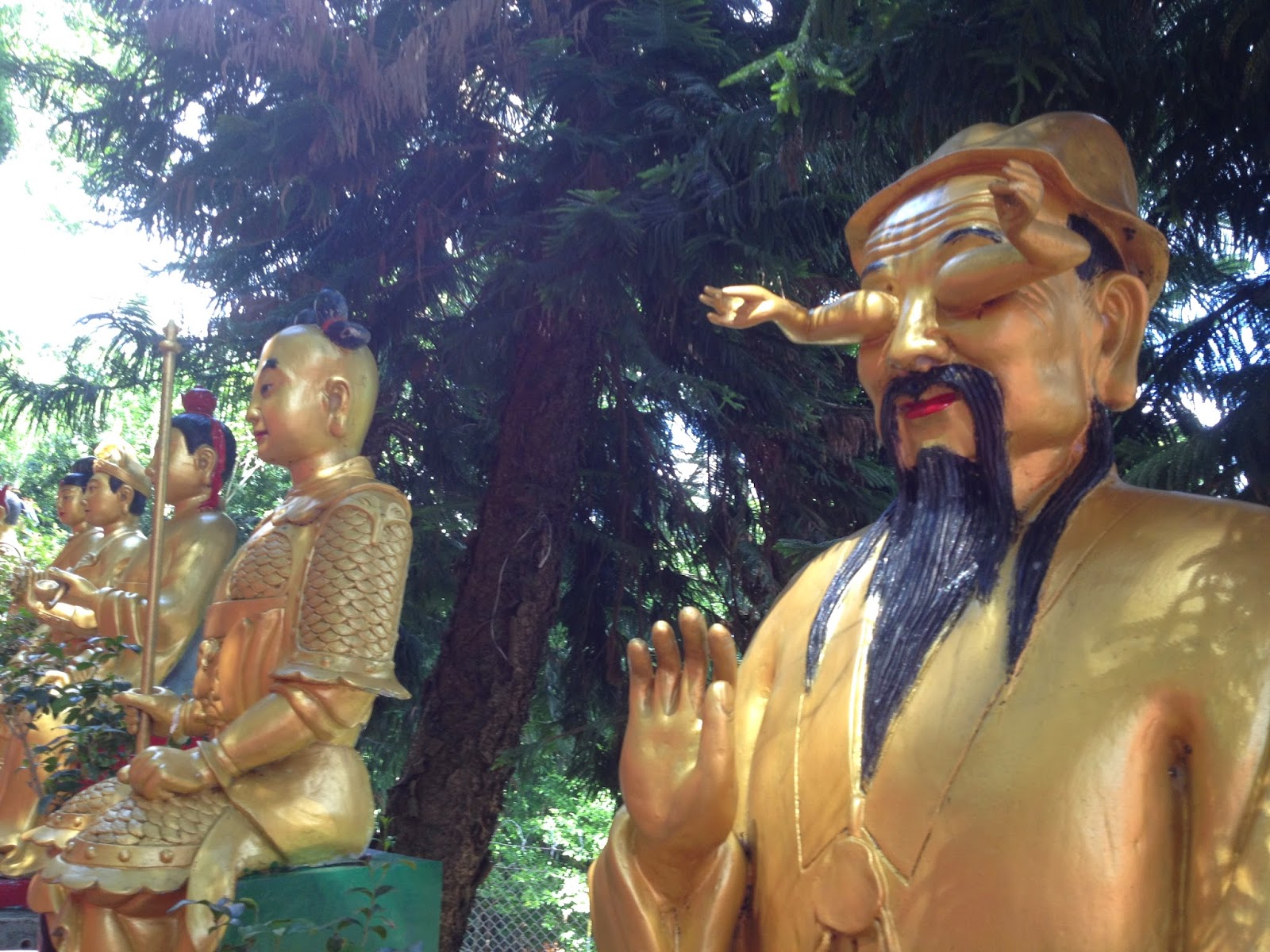 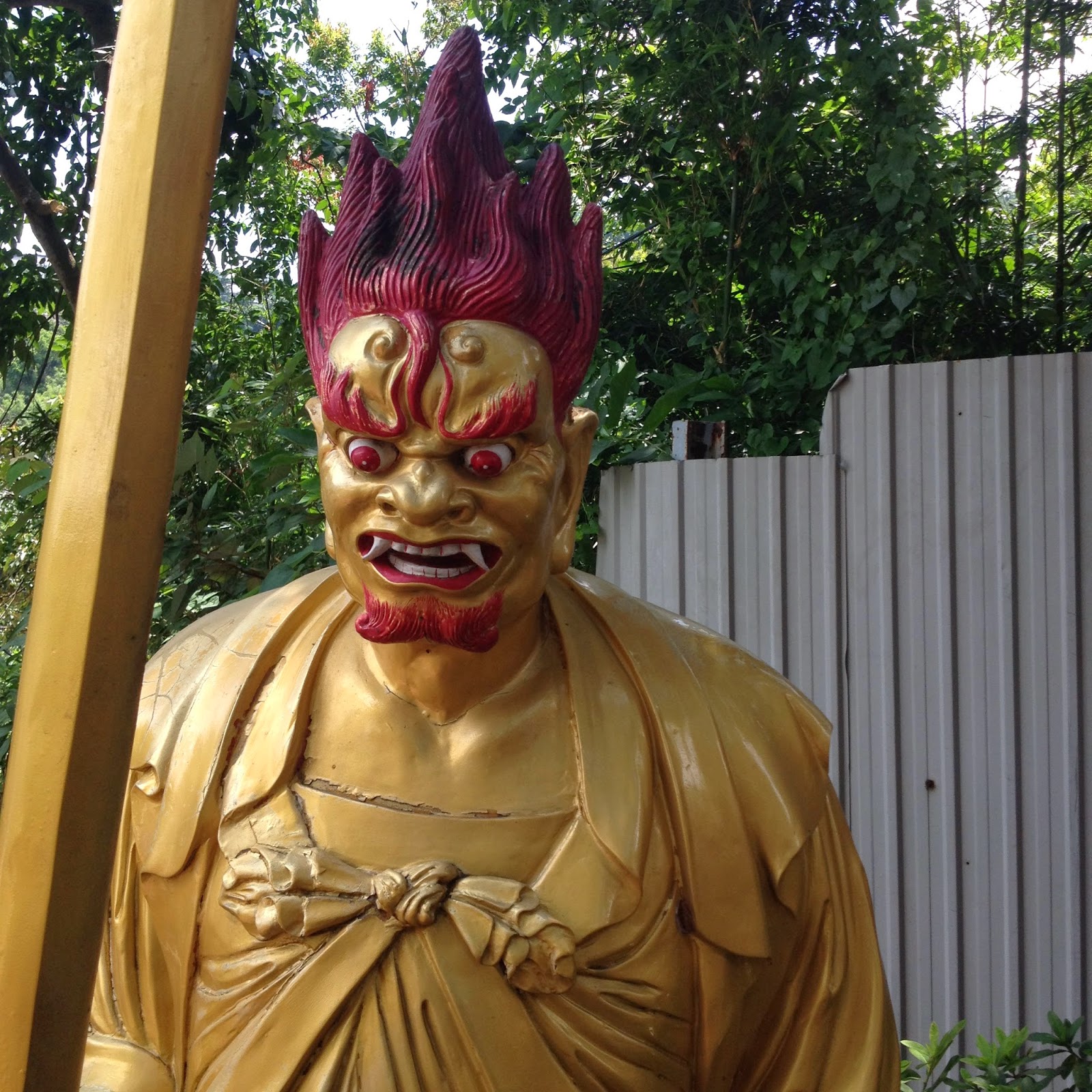 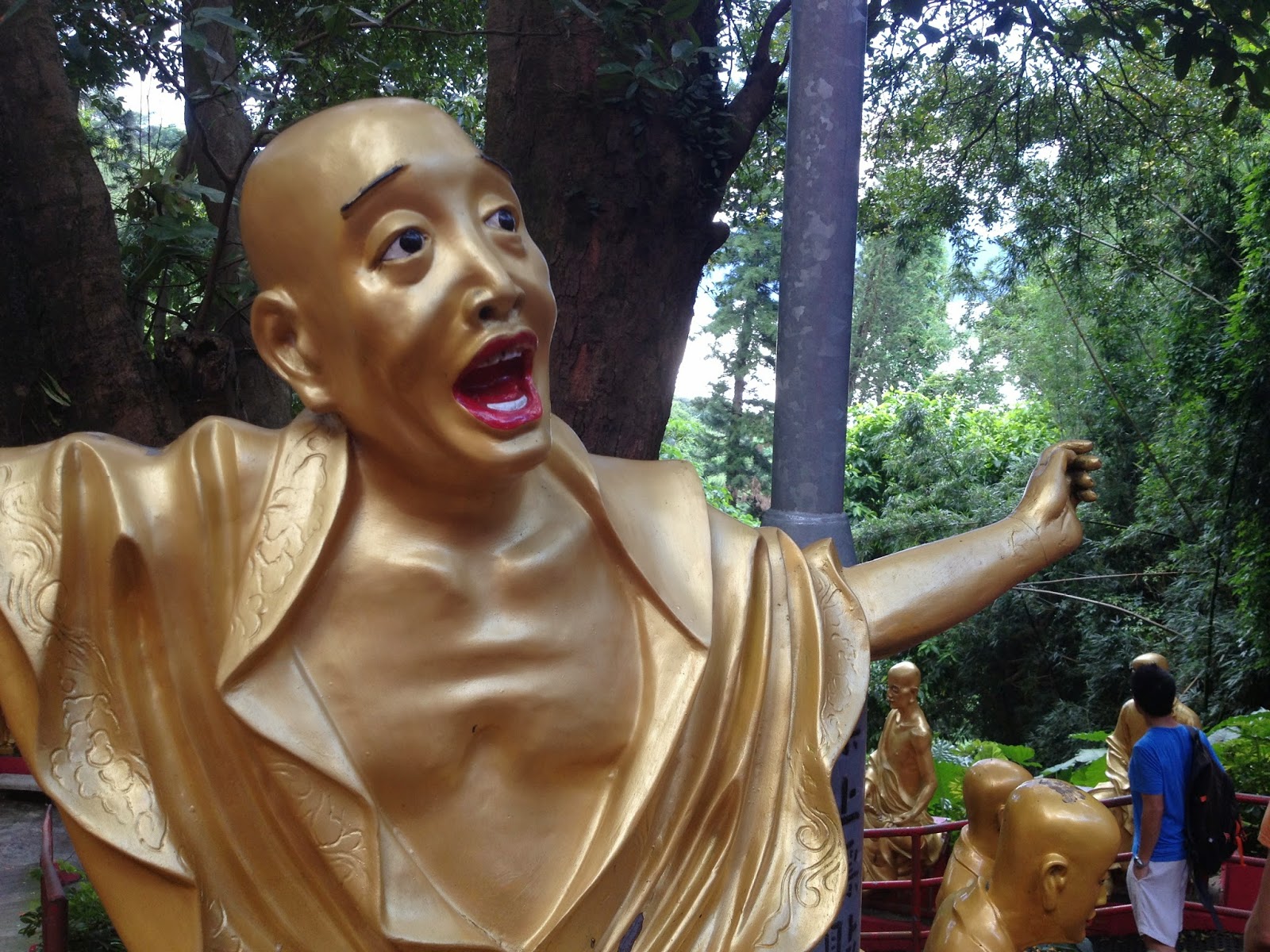 Seriously, that guy has arms coming out of his eyes!  If that doesn't haunt your dreams, I don't know what will.

I guess I should rewind to the beginning. Let's start with something more cheerful.

A few of my classmates and I decided to meet up before the appointed time so we could have dim sum at Din Tai Fung, a famous Taiwanese place.  Unfortunately, it's too famous for us; the wait was forty minutes.  We haven't absorbed enough of the queuing culture, so we decided to ditch in favor of Triple O's.  Nothing like a good burger and shake to replace dim sum.

After lunch, we headed over to a historical place highly recommended by our teacher: Snoopy World.  Yes, I did squeal a little inside when I saw the little Woodstock nests surrounding poles all down the walkway.  So. Cute.  The main attraction the giant Snoopy sleeping on top of an enormous doghouse.  They have all kinds of other sculptures.  Not that I would know from going inside. As we were applying more sunscreen, we saw that it was closed because of a "thunderstorm warning."  Strange... 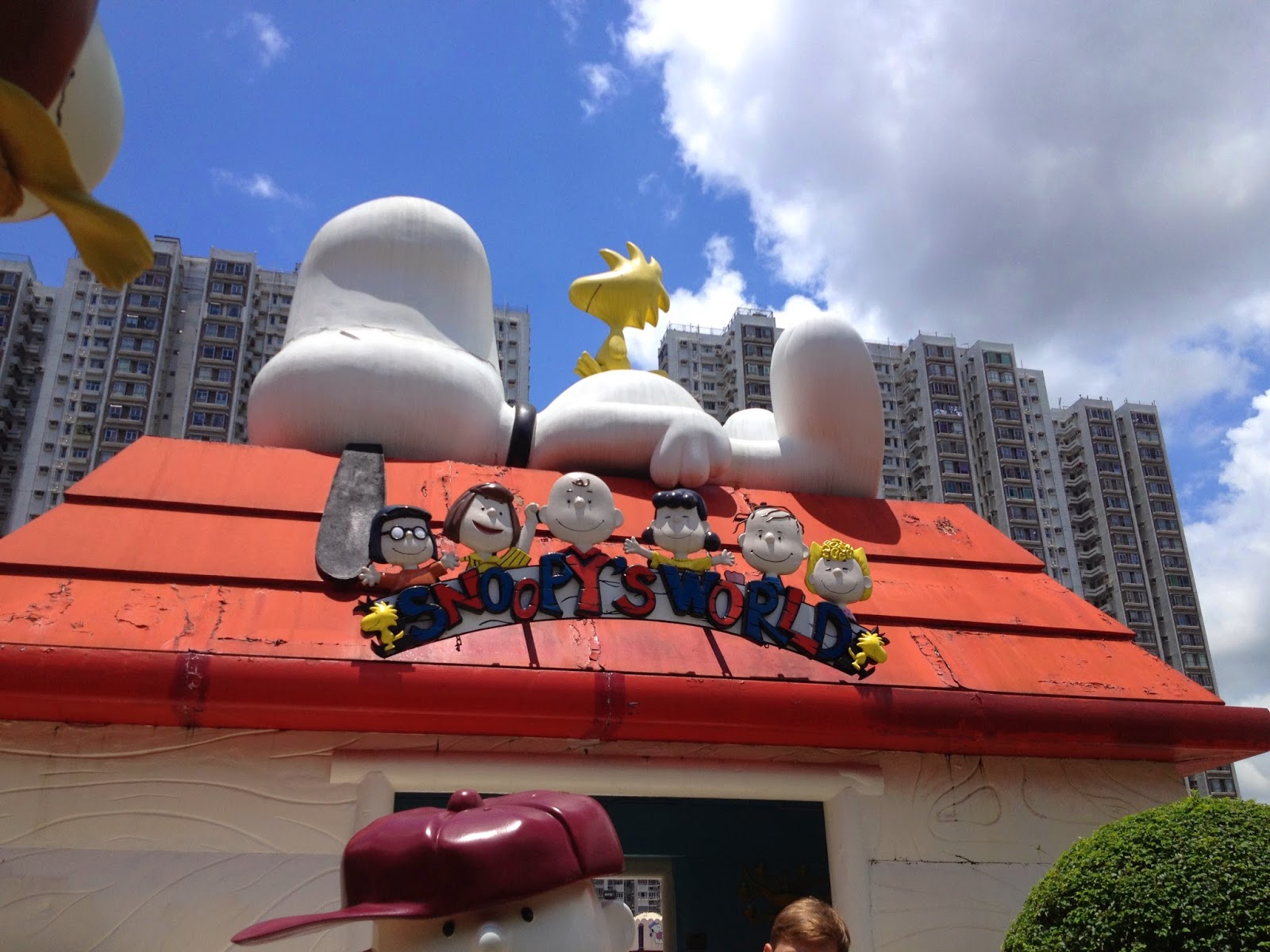 Snoopy is oblivious to the "thunderstorm"

After that it was about time to meet our teacher and other classmates.  On a side note, classmates isn't a word that I ever used in the US, but now after hearing it constantly, I also use it.  There are many English words that once sounded strange to me that now sound normal.  My English is slowly morphing, and I'm not entirely sure that it's a good thing.  Anyway, we met up with our class and headed over to the mountain.

Now, besides the creepiness of some Buddhas, there was another reason for the nightmare.  It was so sticky-hot!  We were climbing the thousands of stairs to get to the top, and I think we were having some kind of competition to see who could sweat the most.  It was like doing a stair-climber workout in a sauna.  This is real life, people.

We finally made it to the top.  Triumph!  Our teacher explained the significance of some of the statues, and then we high-tailed it up this tower.  Now climbing more stairs doesn't sound sane after what we went through to get up the mountain, but we were rewarded at the top by shade and a wonderful breeze.  The view of Shatin was also nice. 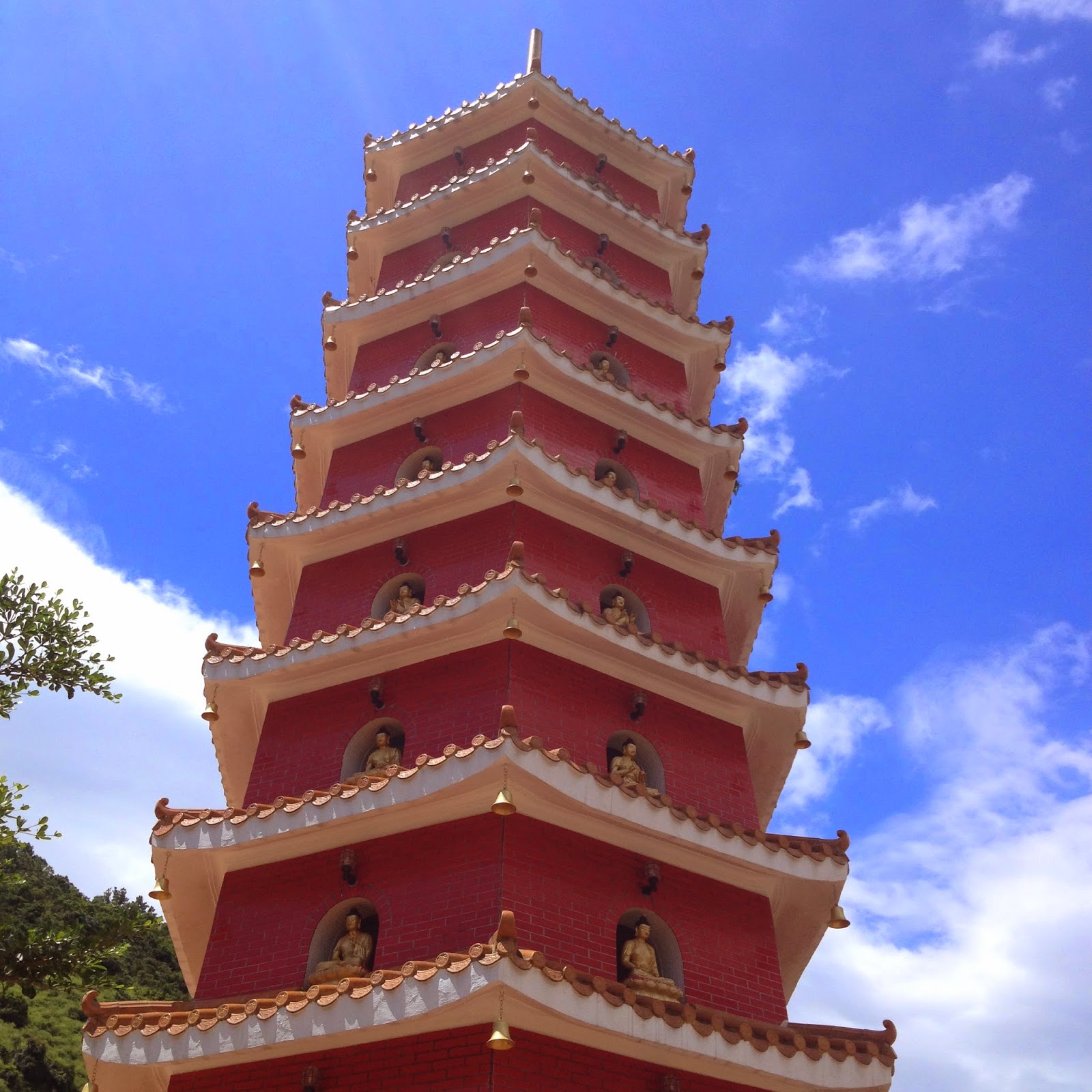 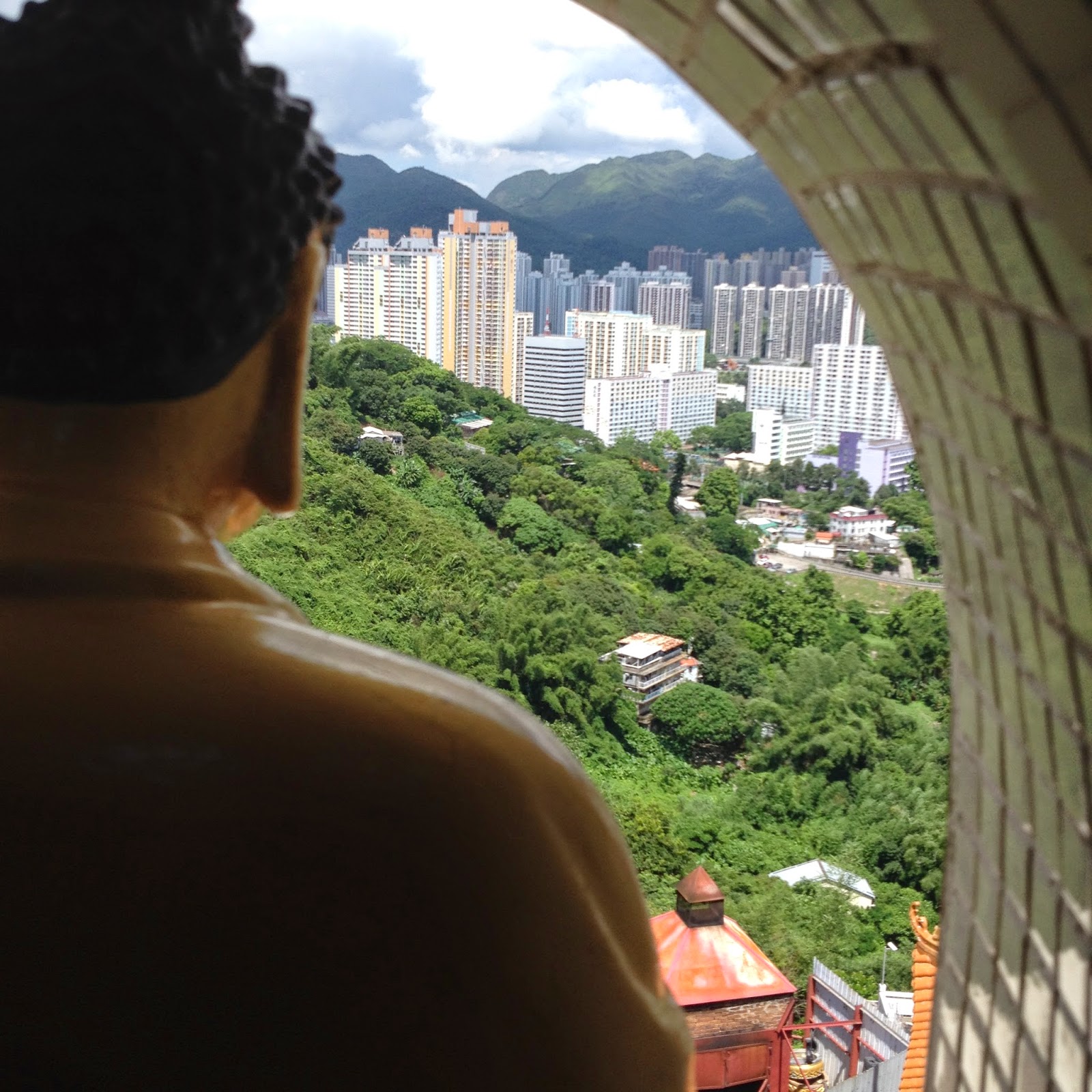 Peeking over a buddha's shoulder

After tearing ourselves away from our breezy lookout, we wandered around the main courtyard.  It was still hot, but also very ping4 zing6, peaceful.  There were a few other people quietly burning incense or looking around, but it was empty compared to Wong Dai Sin or the other temples I've visited. Maybe the climb and the heat deterred other visitors from coming.  Either way, I was not sad. 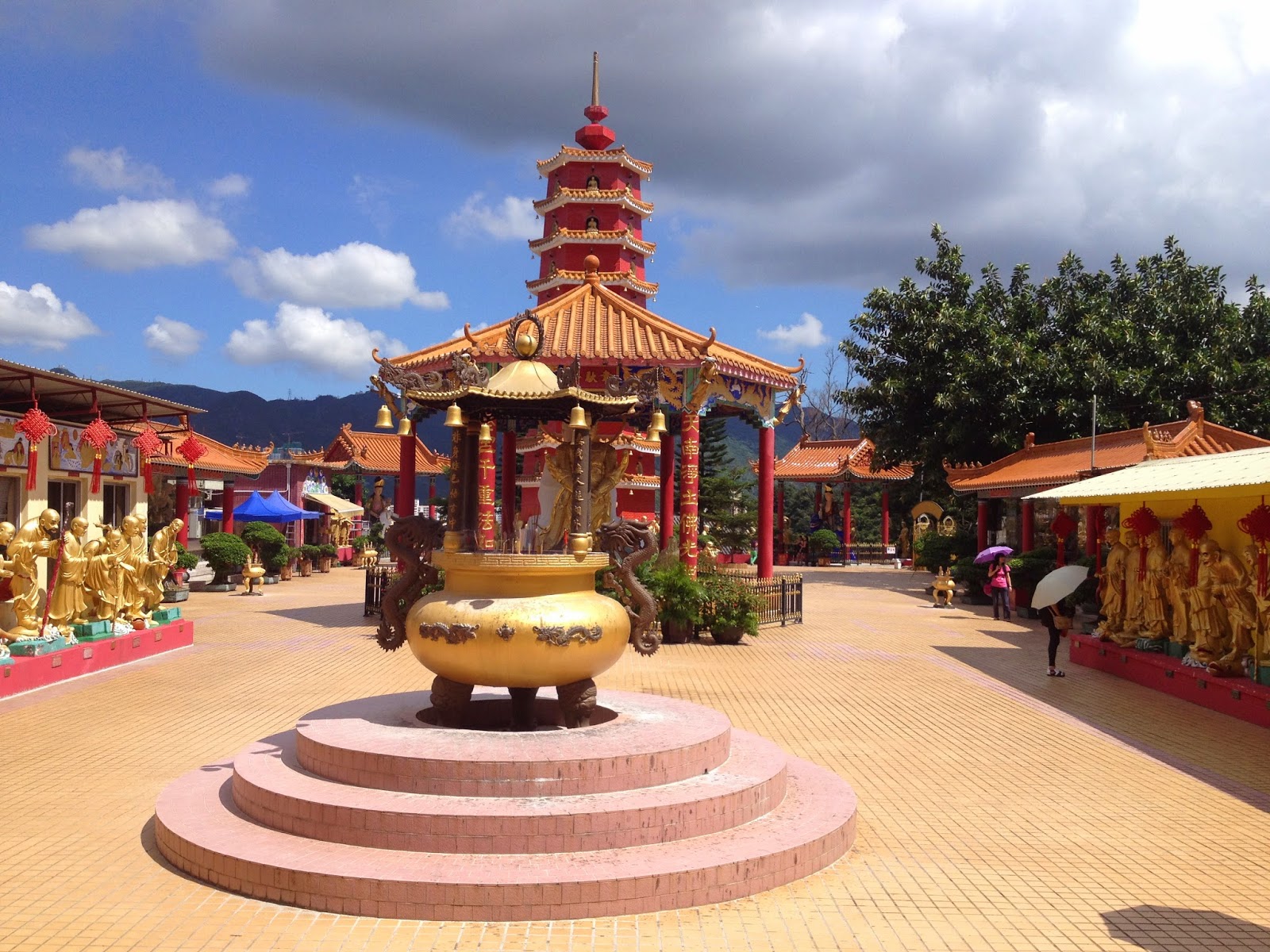 We wandered further along and came to a turtle pool.  One couple had brought their six-year-old daughter, and she was enamored with the cute little gwai1.  Lou5 si1 (teacher) told us that it was kind of like a turtle orphanage, so people could take their turtles there if they couldn't take care of them anymore.  That got E's attention.  She has a turtle and has been worrying about what she'll do with it if she moved away from Hong Kong.  And here's the solution!  Although I can't say that lugging a turtle up all those stairs would be that fun... 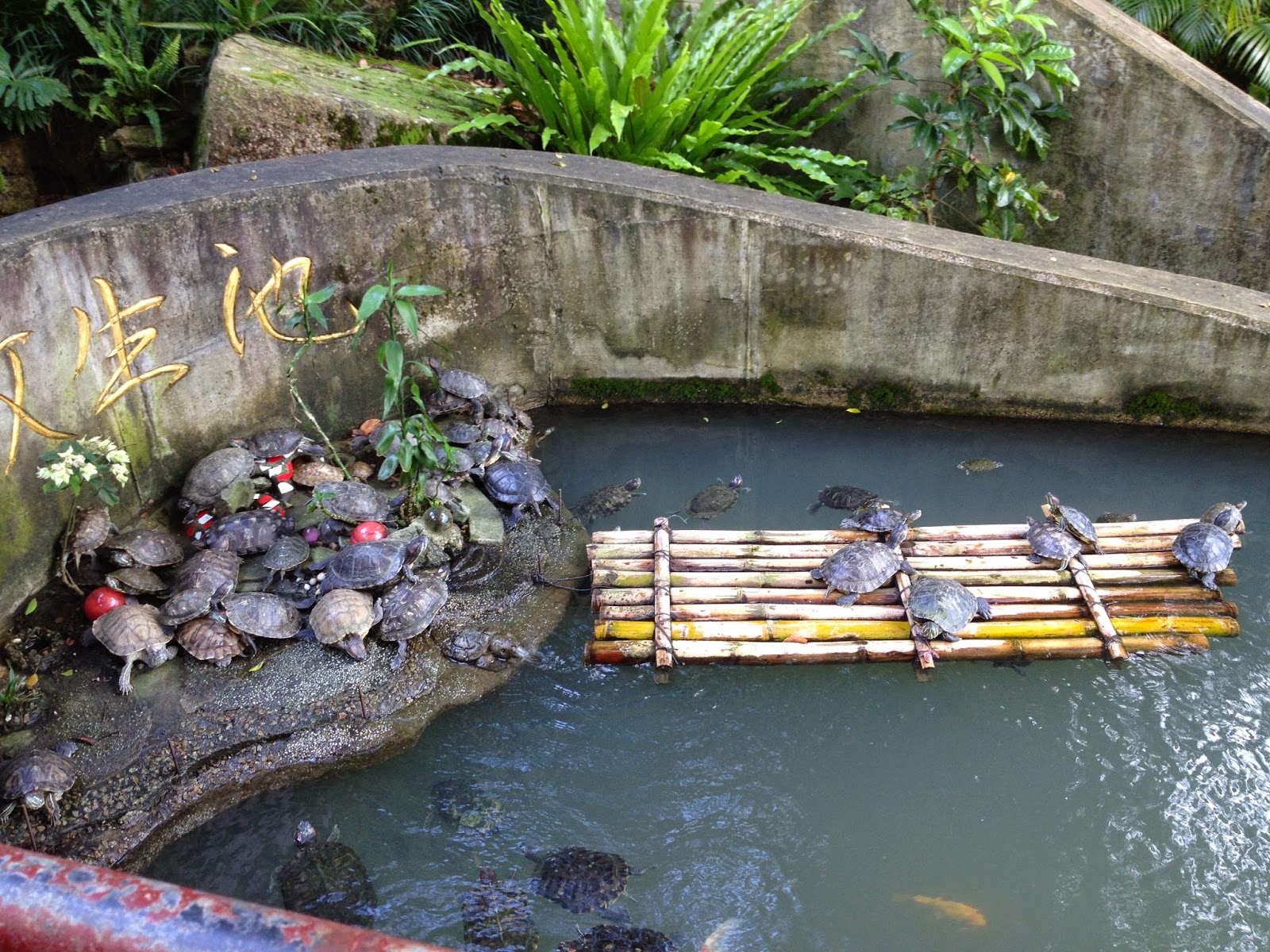 Just up from the turtle pool was a hill of buddhas.  We'd been seeing buddhas all over: on the stairs, around the courtyards, lining the walls of the temples, in the windows of the tower, etc.  But I think these looked the nicest, nestled against the green.  It kind of looked like it was right out of a storybook.  Above that, there was a beautiful white statue posing majestically in front of a waterfall.  A photo-op if I've ever seen one. 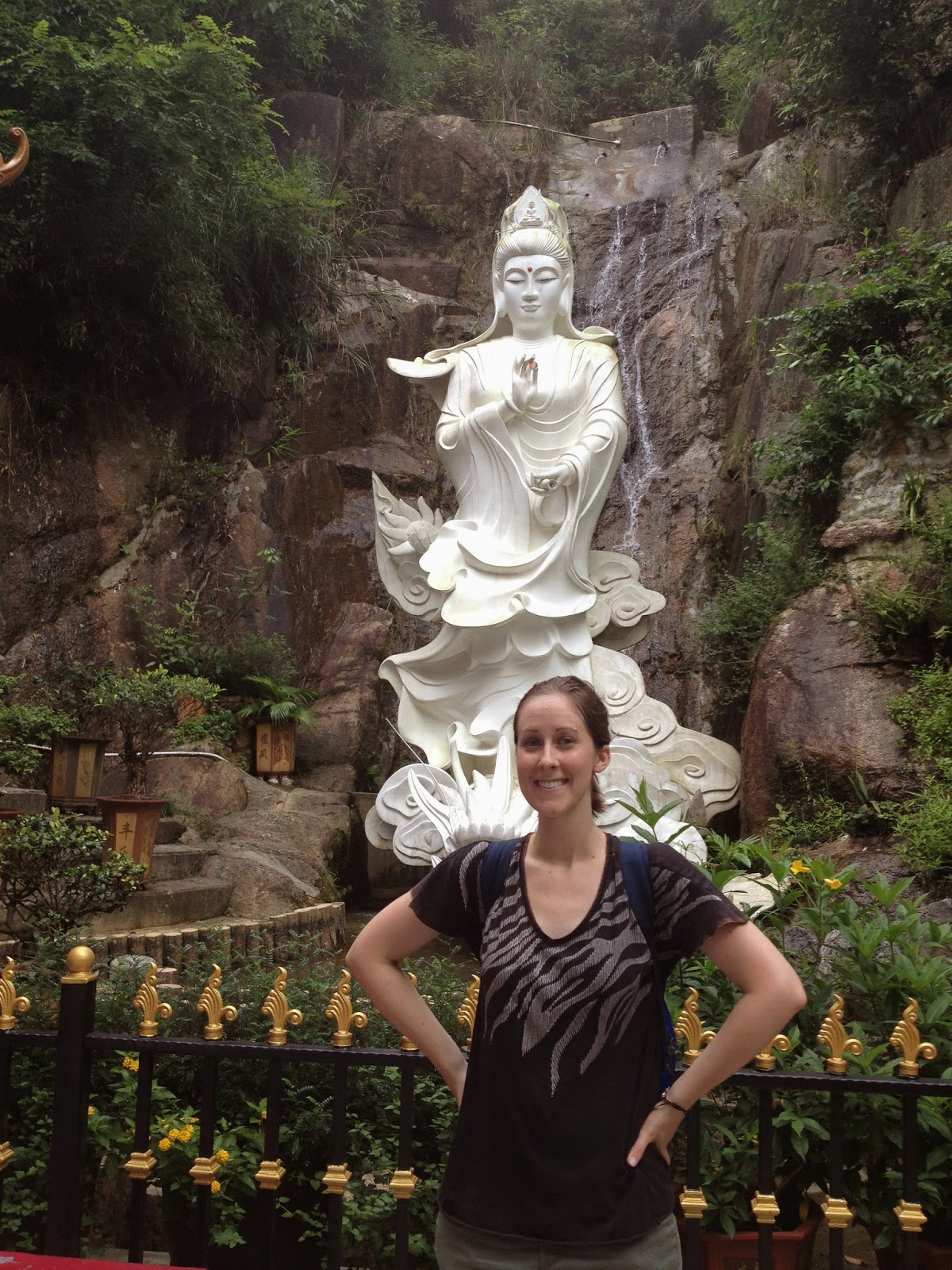 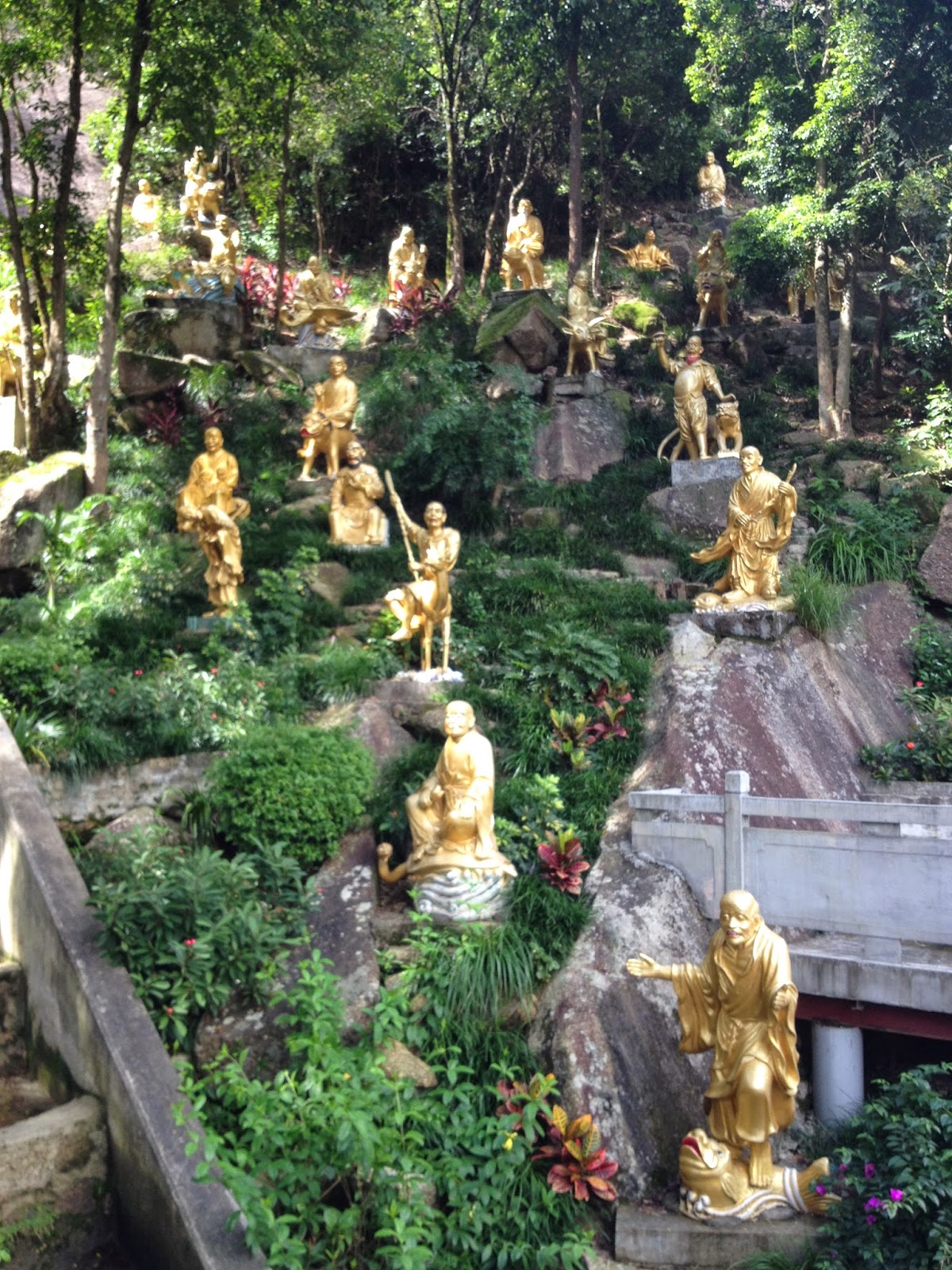 Finally it was time to go down.  We couldn't resist but pausing on the steps next to our chosen buddha and pose.  Although I was entirely too sticky at the end, I had a great time. Thanks for taking us on the field trip, Teacher W!  M4 goi1 saai3, lou5 si1! 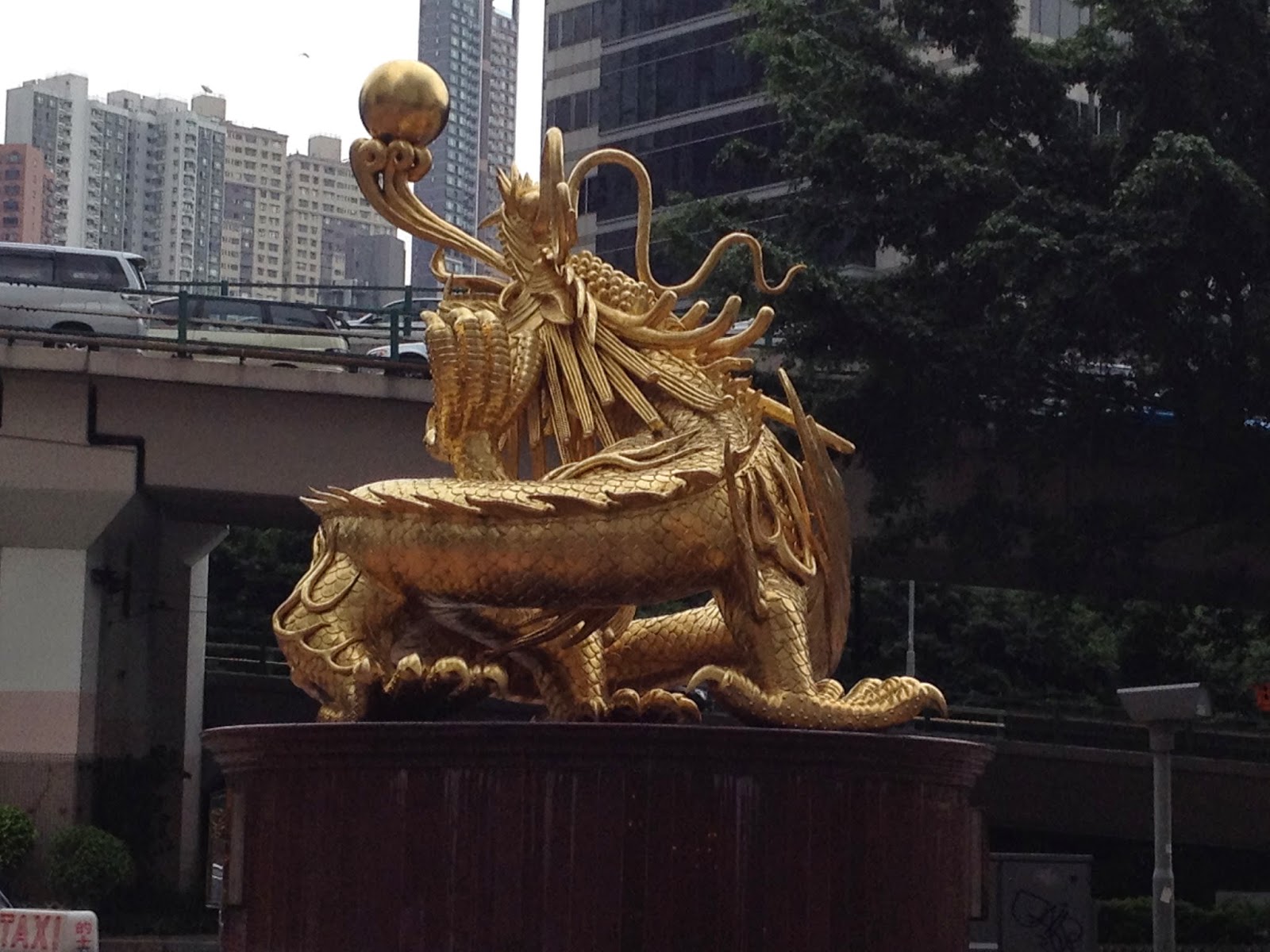 This is Falcor.  Well, I'm sure that's not his real name, but I decided to name him after the Good Luck Dragon from Neverending Story.  It fits, I think.

Most people don't even know he exists.  I'll tell people about the "hou2 daai6 gum1 lung4" near the Aberdeen Tunnel, and usually they don't know about him.  But to my family, he's very special.  We always say we'll meet at the dragon or when we're coming home we'll text each other that we're by the dragon.  He's a fixture.  But then again, if you don't regularly go through the Aberdeen Tunnel, I could see how you would miss him.

There's a plaque near Falcor.  I guess it's telling about how this golden dragon got there, but I can't read it since it's all in Chinese.  One day, maybe I will.

So if you ever find yourself on a bus or taxi heading towards the Aberdeen Tunnel, look up from your phone for a moment and say hi.  He'll be waiting!
Posted by Lolai at 12:44 AM No comments: