I’ve been posting about things I’ve been learning, but recently someone suggested that I talk about how I’m actually learning Cantonese.  So it's a bit long, but a rundown of my Cantonese learning history.

My first forays into Cantonese were a bit half-hearted, I’m embarrassed to say.  The first year that I lived here I didn’t do much studying at all.  My friends or coworkers might teach me a word here or there, but it was all very hap-hazard.  I carried a little notebook around so I could write down new words, and I wrote them just like I thought they sounded.  At that point I hadn’t learned much about tones, so I just wrote high, medium, low, or rising lines to remind myself of the sound.  But even then, it really wasn’t exact, and I often forgot what my own lines were supposed to represent. 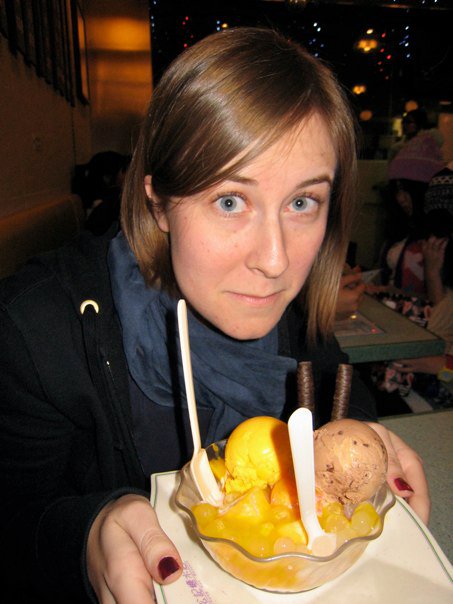 I was so young and innocent (ignorant?) then

And after moving back to the US, I forgot most of the words I had learned, excluding the few I used as a secret code at the cafe I worked at.  I would say sai1 sau2 gaan1, bathroom (or literally, wash hand room), to my coworkers, alerting them of my imminent dash to the little girls room.  Soon, it caught on, and all of my coworkers started saying it.  Even my boss, who for some unknown reason seemed to hold a grudge against the phrase, eventually cracked and used it.  The other two frequently used words were leng3 zai2 and leng3 leoi5/2, handsome guy and pretty girl.  One of my coworkers especially liked to say “leng3 leoi2” to tell me to let him take the register when a fetching young lady approached.


After I had decided to move back to Hong Kong, I started my study in earnest.  I loved watching Carlos Douh videos, a Canadian guy who makes Canto slang videos. I also started watching a lot of polyglot videos that really inspired me.  Polyglots are people who can speak many languages, and they have a thriving community of bloggers and vloggers. I was inspired by some polyglots like Benny Lewis and Moses McCormick (whose favorite language is Cantonese!) and many others to jump into language learning.

One of the biggest things I took away from them was to "just speak" to people, even if I was nervous and if I felt like my ability was low. Since I was still in Alaska, I didn't have many (any?) Canto speakers to speak with, but I was able to practice my extremely rusty college Spanish. Although I'd forgotten most of my grammar and a lot of vocab, I was still able to have fun conversations with people. Those interactions really built my speaking confidence, which helped me out when I made my triumphant return to Hong Kong. 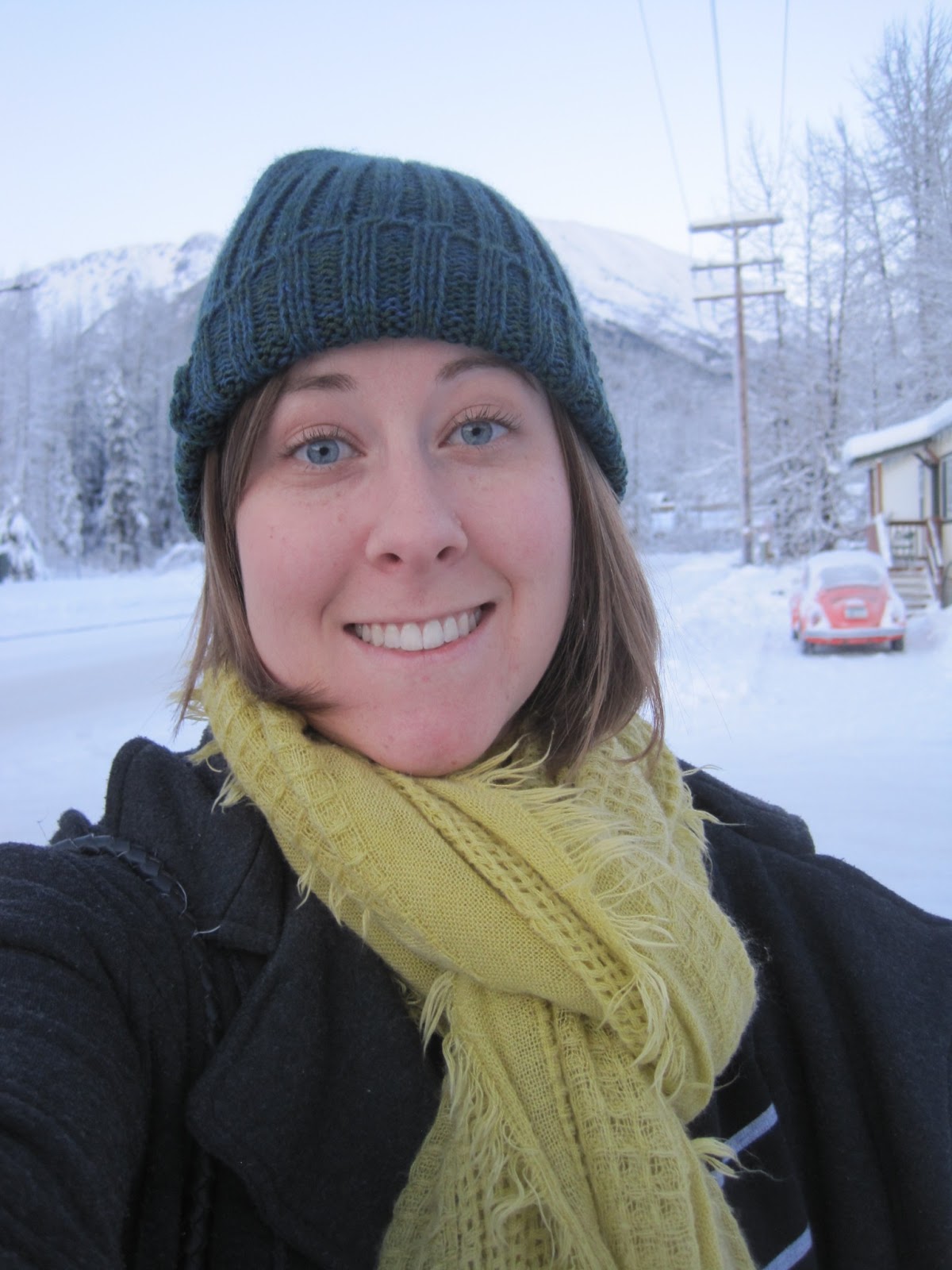 I'm trying to practice, but my tongue is frozen!

Also while still in Alaska, I started studying a really old version of Teach Yourself: Cantonese from the library. It is quite thorough, but I didn't totally trust it. When I would text a friend, trying to get some practice with the words I learned, he told me that only his grandmother would use some of the words. So a little outdated.

After visiting one of my friends in California, a Canto speaker, I realized that my tones needed some serious work. At that point I kind of knew what they were in general, but I didn't have a very good grasp of them. My friend often had trouble understanding me because of my bad tones, so I decided to sit down and work that out. I found this wonderful website that does tone drills. I would do the basic tone drills at least five times a day for a few months until I felt like I really knew them. I found that after that, people understood me MUCH better than before!

Of course this was also before I fully realized that Cantonese has a written and a spoken language. Ah, blissful ignorance. Well, it was blissful until I realized that I'd been studying words from a website for several weeks that were only written Cantonese! No one would ever say those words! Aaahhhhh. Certainly frustrating. Most of my time in Alaska was trial and error, but at least it was a start. I still consistently run into those problems, as even now people will sometimes tell me the written word instead of the spoken (why?!?!?!?) but I'm more wary now.

After arriving on the island of milk tea, I was eager to start practicing. I've been in Hong Kong for nine months, and I'm still as eager to practice speaking as ever. I try to talk to as many people as possible: my security guards, people in my building's elevator, clerks at 7-11, ladies handing out flyers, etc. And of course I also try to talk to my ever so patient friends and coworkers. I've also joined a language exchange meet-up group so that I can have consistent practice every week. It's great to be able to ask questions and just talk with someone to help me. I also started taking an ISS (International Social Service) Cantonese class. It meets for three hours Sunday afternoon. That can be a little brutal, especially on gorgeous days, but it's worth it. My teacher puts on a tough front to keep us from skipping, but he is really funny and dedicated to teaching us. He's great about mixing vocabulary, practice and drilling, as well as throwing in cultural information for fun. I'm in the intermediate class now (although I wouldn't say I'm actually intermediate level), but unfortunately there aren't enough students to offer an advanced class. I'll have to wait until December. But maybe that's actually good for me, since I can take some time to really go over my notes and try to memorize everything before starting the next class.

Yeah, memorization. Not too long ago, I bit the bullet and downloaded the Anki mobile app ($25USD!). I waited for a long time because of the price, but now I'm so glad that I have it. It's basically a spaced-repetition flashcard app that let's you study anywhere using your phone. I've been working on inputting my notes from class and from the language exchange, and it's a lengthy process. Slowly but surely! This also really helps me with the study challenge my sister and I cooked up. Now I can study anywhere! On the MTR, in between lessons at work, waiting for an ATM, anywhere! I think now I will be the study champion.

Finally, I also think that surrounding myself in Canto really helps. I think watching movies and tv shows are really important in language learning. I've been a little lazy recently, but for quite awhile I was watching at least one movie a week. I really need to get back into it, since I feel like i make a lot of connections that way. I usually watch long movies using English subtitles. I often rewind and listen again if I read something that I know but I didn't hear it. Or if I see it on the subtitle and think it's a useful word, I might pause the movie to look it up in Cantodict and then watch it again to try to catch it. I also like to watch Youtube videos without English subtitles They're shorter, so it's better for my attention span, since my level is still pretty low. I'd really like to start watching some Canto reality shows, so if you have any recommendations (and links to watch them), let me know!

When I'm cleaning, I like to listen to podcasts like Naked Cantonese (no new episodes but over 200 to work through) and CantoneseClass101 (you can find it on iTunes). I also listen to random ones from RTHK. And of course I eavesdrop everywhere I go. So be careful what you say around me! Who knows? I might understand!

Oh, I forgot the other important part, talking to myself! I often try to think in Cantonese. If I'm walking down the street, I will try to talk to myself about what is happening around me. I'll comment on a lady's hairstyle in my head, only to realize that I don't know what hairstyle is. On good days, I will immediately look up how to say "hairstyle." On bad days, I will forget. 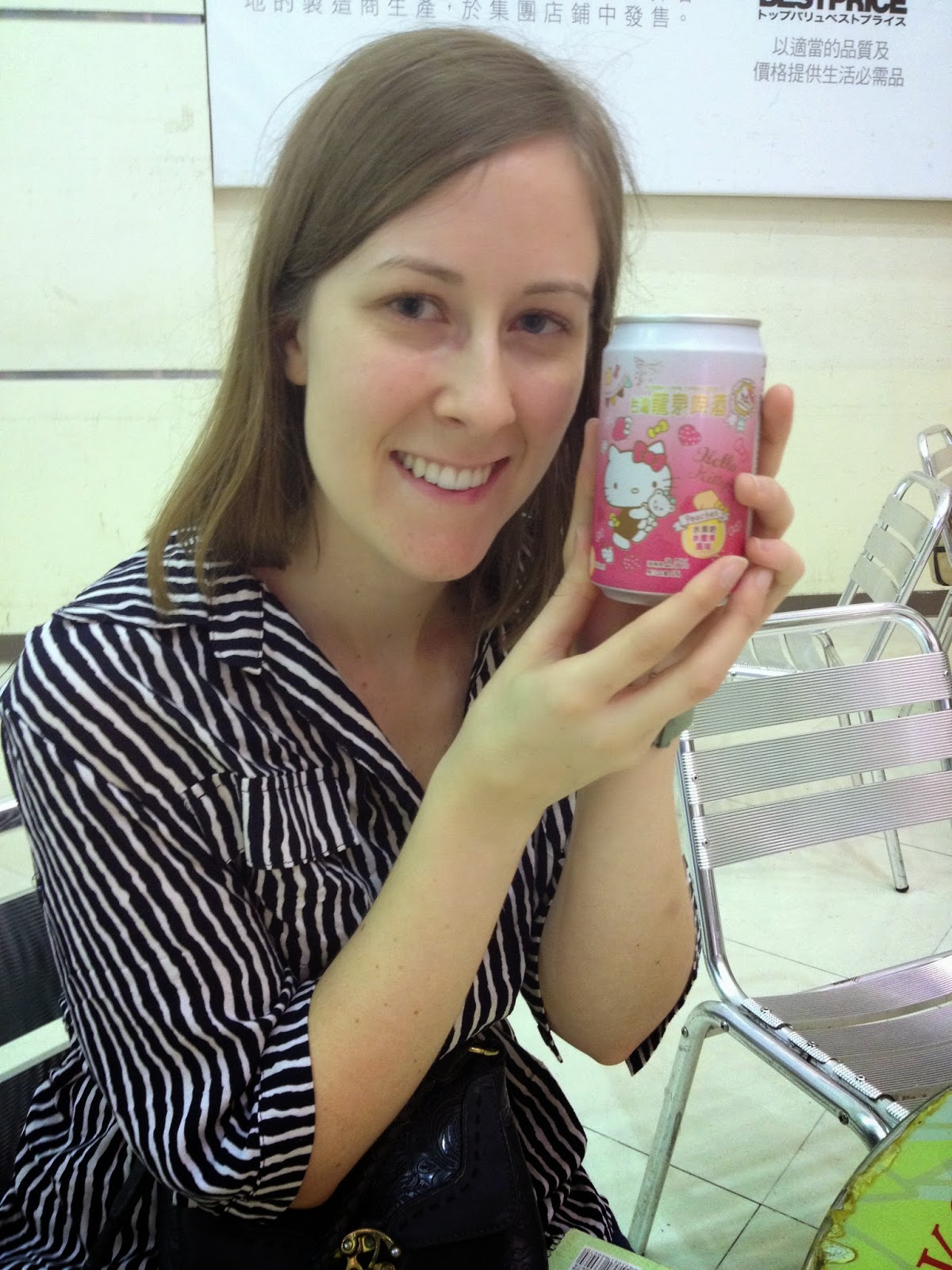 Some days, I study. Other days, I just drink Hello Kitty beer.

It's a process for sure, and I'm very far from fluency, but I'm having fun and learning a lot. And that's what counts in language learning!

I've tried to link most of the resources here, but if you have any other questions about anything, just drop me a comment!
Posted by Lolai at 11:41 PM