Yeah, yeah, so this isn't exactly soon. But here I am! And back to our regularly scheduled program.
Phnom Penh. Lillian and I left Bangkok on Monday afternoon after a lovely morning riding the river and running through a temple with Peter.
With Cambodia, you have to get a visa upon entry. We stood in one line long enough to pay and surrender our passports and then got in another line to pick them up with our new visas. After that we headed out front. I got some of my Hong Kong dollars changed into US dollars. It was kind of weird to have good ol' greenbacks again. Cambodia does have its own currency, the riel, but it also uses US dollars. They don't use coins so any change for a US dollar is in riel.
Our first stop was to get a Cambodian phone card for Lillian's phone. We found a booth that sold phone cards and asked for the cheapest one, the two dollar card. The guy told us that we needed the five dollar one so we could make more calls, and we told him that we didn't need to make many calls. We had arranged to stay with a friend of a friend and really just wanted it so we could call them if need be. He gave us the two dollar one so we could make sure it worked. It didn't, so he said, "Oh, you don't have a 3G phone. You need to buy the seven dollar one." Well, that sounded kind of like bull to us. Lillian does have a 3G phone. In Thailand, we got a phone card for less than two dollars, and here we had to pay seven? Scam or not, we weren't going to pay seven so we just left to find a tuk tuk.
A popular form of transport in Cambodia is a tuk-tuk, a little cart that is attached to a motorbike. They're fun to ride in although I never liked the bargaining process. Our friends told us that we should pay about three dollars for a tuk-tuk to their place. The guys who accosted at the entrance of the airport offered us one for seven dollars so we declined. We weren't sure where the cheaper ones were but decided they had to be somewhere near the road. A man came up to us enroute and offered us a tuk-tuk for five dollars. We kept walking and started bargaining with him. Soon we were in a crowd of drivers all trying to get us to use their tuk-tuk. We were pretty firm, and finally the first guy agreed to take us for three dollars.
I told him that we needed to go to the Russian Market (their house was near there) and then climbed in. Lillian and I had fun relaxing, taking pictures, and looking at the city. We had been driving for at least twenty minutes when the driver pulls over. We weren't sure what he was doing, since we weren't near a market. He turned to us and said, "Where are you going?"
WHAT?!?!?!? We'd been driving for twenty minutes and it just now occurred to you to ask? We told him, again, that we were going to the Russian Market. He looks very serious and says, "Oh. We are near Central Market." Then he went silent and stared at us. "We didn't say Central Market." Lillian told him, "We said Russian Market." He just shifted his weight and said, "Russian Market is on the other side of the city. It is very far away." We sat there a minute, like, "So?" Finally he said, "Petrol is very expensive. For one more dollar I will take you to Russian Market."
We were not happy campers. We didn't want him to hear us discussing what to do, so we switched to Spanglish, a trend that we kept up for the duration of the trip. We were pretty sure he was just trying to scam us, which was annoying. If it really was an honest mistake, why didn't he go all the way to the market and then ask us for the street number? Why didn't he look at his map or ask other people (which is quite common; apparently tuk-tuk drivers don't actually have to know where they're going to accept a passenger).
Finally, we decided to give him the extra dollar. We could have gotten out and flagged down another tuk-tuk but by then it was pretty dark and we were tired; we just wanted to get there. We finally got to the right market but he couldn't find the street. To make matters worse, I told him the wrong street name! They were in the same area, but still. I felt bad that I gave him the wrong number so I gave him another dollar. So he got his five dollars anyway.
Finally, we got to the right house. We waited in front of a huge metal gate with rings of barbed wire running the length of the fence and padlocks on the entrance. We rang the bell and a girl soon opened it for us. The girls we stayed with all worked with The Daughters of Cambodia, an organization that helps women who have just been saved from the sex trade. They're all lovely girls, and very hospitable.
As soon as we had dumped our stuff and freshened up a bit, the girls took us to a nice restaurant for dinner. The food was SO good! And I even got a smoothie! After dinner we went home and crashed. We had to rest because we had to get up early the next morning to make our bus for Siem Reap. 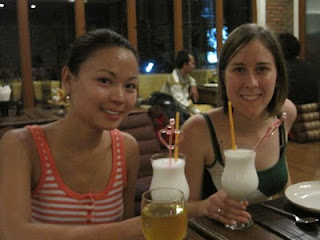 Lillian and I with our SMOOTHIES! We were eating Khmer style, so we all sat on the floor. 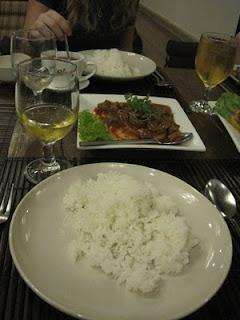 Our dinner was very tasty. I forget what they call it, but we had a dish of cubed beef cooked in a tomato sauce with rice. The yellow liquid is cold rice tea--I loved how refreshing it was. 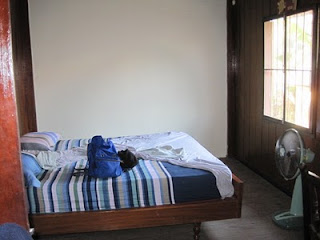 One of the girls gave up a bed for us. Thanks! It was very comfortable but we were kept awake first by some dogs and then by some roosters. 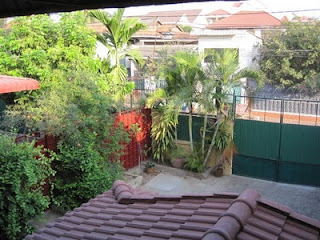 The view from their balcony.
Once again, wait for the next installment to see what happened during the rest of our trip. As always, thanks for reading!
Posted by Lolai at 11:09 PM No comments:

Once again, sorry for being gone forever. My good friend Hannah just came for a nine-day visit! I was so excited to have her come, and I definitely didn't have time to blog.
I have a ton of stuff to write about now: Cambodia, Hannah's visit, Music Mondays, my Best and Worst list, new thoughts, etc.
So hopefully I'll get to all of that soon! Later.
Posted by Lolai at 4:28 PM 1 comment:

Sorry to disappoint you guys, but this post will not actually be about Cambodia. True, Cambodia is in the title of the post, but that's simply what we named our whole trip. I like naming things. And instead of throwing massive amounts of information/stories/pictures at you, I will break our amazing Chinese New Year trip down into several parts. The first part began in Bangkok. In case you're wondering, we decided to fly to Bangkok and then to Phnom Penh so that we could save a little money and avoid sleeping in an airport/wasting time. I love Bangkok so I wasn't complaining.
But let's rewind. I ran to the airport as soon as I got off work on Saturday. The check-in was uneventful, except for the fact that I can now use my awesome Hong Kong ID card to scan in and out. :D Even though it was a short flight, they gave us dinner. I was so impressed! Both our dinner there and back was quite delicious. Good job, Kenya Airways. I give you my stamp of approval.
After landing, we went straight to our hostel and went to bed. There was only one other girl in the eight-bed room, lucky us. The next morning we got up ready for a day of marketing fun. We grabbed a quick breakfast of fried sesame balls, fried bananas, and iced mochas out front. So healthy, I know. Then we were off to Jatujak Market! 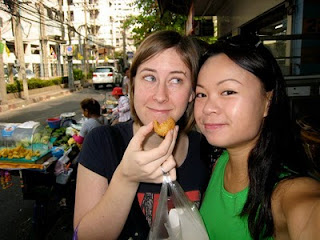 Hmm, sesame balls.
JJ Market is ENORMOUS! Some of you faithful readers might remember my description of it from last summer. Nothing changed except the temperature. I was thankful not to be dripping in sweat while I shopped. We had talked about doing something else in the afternoon but we didn't. We stayed at JJ for five hours. And guess what? I FOUND THE T-SHIRT LADY! I was so excited. I bought some really awesome t-shirts this summer and wanted another one. It was really hard to find but later in the afternoon I found it! The sweet taste of success. 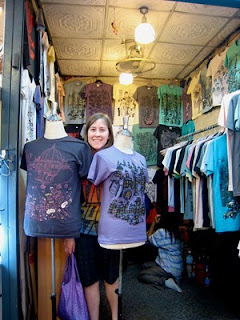 So beautiful.
After shopping quite thoroughly, we called up my friend Peter. I met him last summer when I was doing my CELTA course, and he was teaching at the same center. A delightful fellow if there ever was one. We met up with him at Victory Monument and went to dinner at the a little restaurant nearby. Man, that was such a good dinner. But see for yourself. After dinner we got some smoothies, wandered around a market and went to a restaurant for drinks. 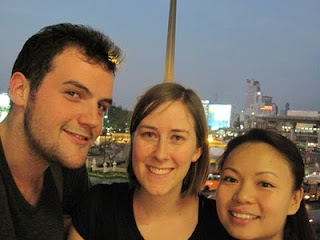 Us at the monument. That's Victory Monument sticking out of my head. 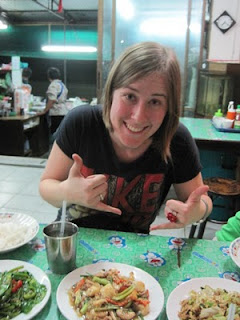 I was excited about the food. 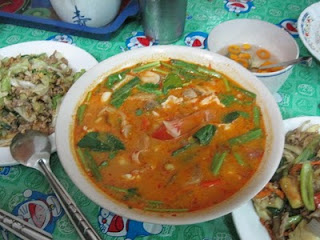 Tom Yum Gai! SO GOOD!
The next day we got up early to cruise the river up to Wat Pho. It was Peter's day off, so he was able to accompany us! Lillian and I decided to play clapping games while we were waiting for him at one of the MTR stations, much to the amusement of some ladies around us.
I really enjoyed the boat ride up the river, and it was glorious weather for a cruise. After alighting from the boat, we headed over to Wat Pho, a large temple complex. It houses the largest reclining Buddha in the world, or something like that. Lillian and I were both wearing tank tops so we had to borrow shirts to "cover our shame," as Peter put it. Modesty at a temple is a must. 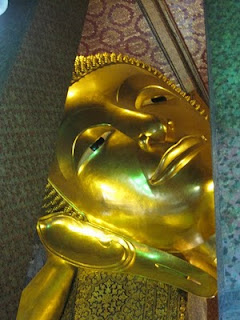 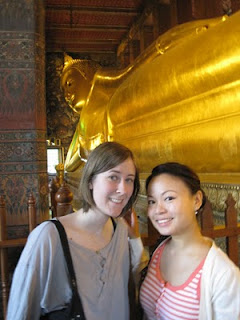 Us, modestly standing with the Buddha. 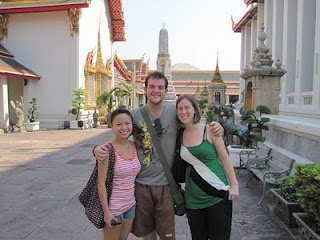 Yeah, we're cool.
After wandering the grounds and taking numerous pictures, we headed back to our hostel to grab our bags and run to the airport. Then we were off to our next destination: Phnom Penh. Stay tuned...
Posted by Lolai at 12:59 AM 3 comments: 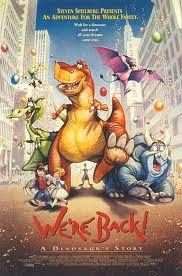 Gotta love that movie.
But just kidding. Actually, I'm talking about Lillian and myself! We arrived back in Hong Kong last night and, being the crazy people that we are, went straight to swing-dancing at Grappa's! Fun times.
Anyway, I've been unpacking and doing laundry and writing postcards (while watching Lie To Me; great show). I'm just starting to do something with my pictures. We had a great time, and I sure have some crazy stories to tell you, so stay tuned for upcoming posts about our Cambodimania!
Posted by Lolai at 10:18 PM 2 comments: