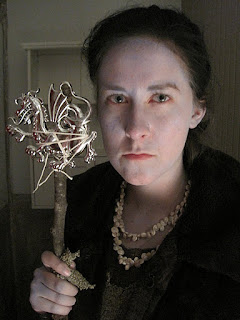 I usually have pretty lame Halloween costumes. Usually I dream up these awesome costume ideas but they never actually transfer into reality. Last year I was a gypsy. Passable, respectable, but definitely not groundbreaking.
I was determined that this year would be different. Fortunately, about a month before Halloween, I watched the movie The Eagle. You haven't heard of it? I found that most people haven't. I didn't think it was amazing, but it was interesting and pretty enjoyable. The best part about the whole movie was the Seal People. They were a tribe in ancient Britannia, or whatever you want to call Britain back in the day, that dressed in furs and painted themselves blue for battle. Now, the Seal People aren't really historically accurate, but they are awesome. And part of it is true. Ancient Britons did paint themselves blue and wear fur. So, I decided to be a Seal Person.
It took me awhile to get my costume materials together. I went to probably a million thrift stores trying to find fake fur coats and other stuff I could use. I stole a stick from a friend's yard and a plastic dragon from my roomies armor (I needed an eagle like the movie, but I used the dragon instead). I even sprung for blue and white body makeup and black hair dye.
The Sunday night before Halloween, one of my roomies and I stayed up all night watching movies (yeah for Devil Wears Prada and Lost Boys) and working on our costumes. I had to sew a tunic for myself using old curtain material, but I didn't have a needle or thread. I couldn't let that stop me, so I used scissors to make holes in the fabric and a pen to push yarn through the holes. I only cut myself once with the scissors. We didn't go to bed until after six, but it was all worth it.
Instead of regular trick-or-treating which I'm too old for (according to my mom, you're too old if you're over thirteen), we decided to go trick-or-canning for a local food bank. Basically, you knock on doors, yell trick-or-can, explain that you actually are looking for canned goods not candy, take the cans they offer (and candy, if it's offered), load up your car, and drop it off at the food bank later. It's basically the most awesome food drive ever.
I recruited my sister and two of my roommates to go with. Here are some pictures of us in our awesome costumes. 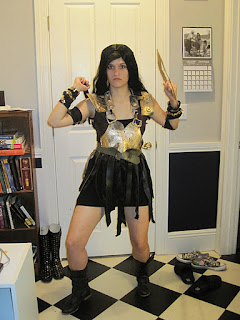 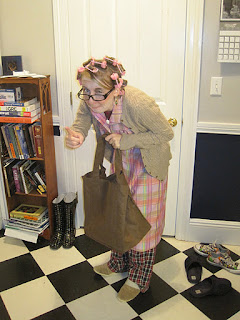 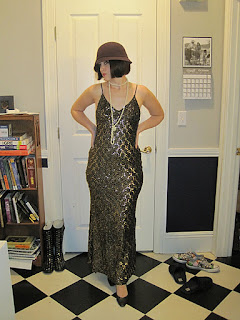 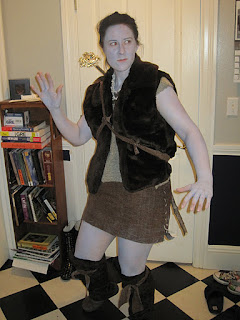 Me, a seal person. 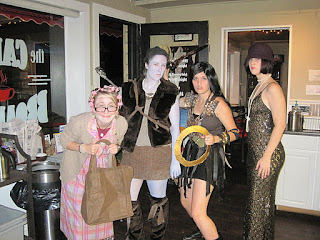 We first walked down the street to the Cafe for a group shot.
We brought a lot of reusable bags and took a car to load cans and foodstuff into. People were really generous. I think since they're expecting strangers to be knocking on their doors and they're probably already in a good mood, it helps. Also, the people who don't want you knocking just leave their lights off, so it's easy to tell who'll be receptive. Altogether, we collected ninety-nine pounds of food!
We also had many interesting experiences, like a guy who had forgotten his pants (he at least had a long t-shirt on) and another man who asked us if beer counted as a canned good.
That's a very good question. I should have told him yes.
Posted by Lolai at 10:21 AM 1 comment: