We picked Nathan up from the airport Thursday night. He's going to be here for ten days!

Dad had the day off work because it was Hong Kong Establishment Day. We decided to go for a hike to a walled village. It was fun, but sort of anti-climatic. The village still has people living in it (amazingly enough) so we weren't even allowed inside. The little temple was cool though. It had these awesome blue dragon-donkey-dogs on the edges of the roof, kind of like Asian gargoyles. On the inside of the great wooden doors were painted two warriors. I stared at them a long time, trying to decide which one was my favorite. It was a hard choice, but I finally chose the one with the many-pony-tailed beard over the haystack beard.

The trip was fun, but it was extremely hot. Mom and I both looked like freshly boiled lobsters. After our returning to civilization and consuming massive amounts of Ribena (a blackcurrent lemon drink that is my new favorite), I felt much better. Then we headed to the airport and retrieved Nathan.

Today we made the pilgrimage to the giant Buddha. The best part is the cable car ride to the bottom of the Buddha. We're swept over craggy mountains surrounded by silvery water. I'm a green fanatic anyway, so I loved seeing the mountains' shadowy greens melting into the brighter mosses. So nice.

The Buddha itself was nice, just not quite as nice as the ride up to it. 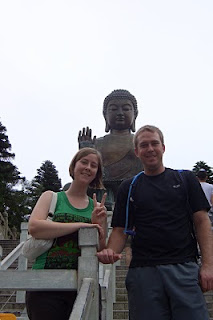 See? He's pretty cool.
Good ol' BB is several stories tall and sticks up above the mountains. We had to climb a ton of steep steps to get to its base. But then again, I guess it wouldn't be much of a pilgrimage if you didn't have to climb a mountain, right? There were several other large statues surrounding the main Buddha, and lots of stone carvings. From Buddha's left side, I could see the bay. The silver water bled into the sky, and the black islands that popped up almost looked like they were floating above the earth. Sorry Buddha, but you can't really beat that.