Agenda for this week: touristing with Nathan and Mom.
I'm trying to get my head around this city, trying to figure out how it works and, more importantly, how I can avoid getting lost. It is coming together in my head even though it's happening much more slowly than I would like. The problem is all of the buses and roads and trams and ferries and buildings. Of course, that is like any city. I guess it will just take some time to learn it all. The bus that I do remember is the one that goes to the library. Bus 592.
Anyway, this week has been fun. We actually have done things other than just visiting the large Buddha. Yesterday, Monday, we went to an awesome geology museum at the University of Hong Kong. I wasn't that excited about it, to be honest. I mean, it's a geology museum. Rocks. Yeah.
The entrance had a giant globe with a chunk cut out of it to show the earth's core. It looked kind of like a giant pacman with a world painted on it. That was cool, but the rest of it was some science drivel and a guy's bronze bust. I want a bust of myself, but instead of looking serious, I want to be doing my zombie face. But I digress.
After going upstairs, my whole opinion of the museum changed. There were tons and tons and tons of rocks, all carefully arranged in their glass boxes. I was enthralled by all of the colors and textures. Some rocks looked like the back of a warty toad while others like sugar crystals. My favorite was a giant slab of tiger rock. It includes tiger's eye and some other rocks that I've forgotten. It was maroon with golden wavy stripes through it, and I wished I could just take it home with me. It would make a great coffee table. They wouldn't miss it anyway, right?
One thing I enjoyed about the rocks is their colors. I love colors. I also have a thing about matching. I have a very clear idea of matching, and I really dislike wearing shades that don't go together. What I noticed about the rocks, is that all of their colors went together. They matched! I was wishing that I had some of those colors and textures in clothing form. Seriously, fashion people, just look to the rock community for inspiration!
On a side note, I wore my lucky octopus tank top that day. I got it in Thailand. There's no real reason why it's lucky, but I like the tank top and I like saying it's lucky. I think I got it from Calvin and Hobbes. He had his "lucky rocketship underpants", and I want something lucky too. I also try to make the syllables similar. 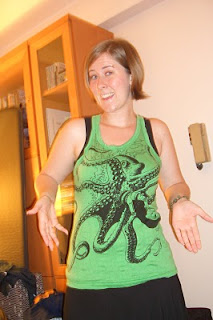 Here's the front. The armholes were a bit too big, but with a black tank underneath, it works great! 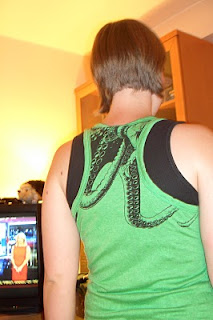 And the surprising yet wonderful back!