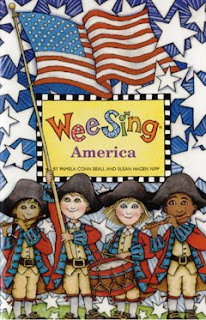 Wee Sing. Does it ring a bell? It's a set of audio books that teach kids classic songs, poems, and quotes. The set includes Wee Sing Fun and Folk, Wee Sing Silly Songs, Wee Sing Animals, Wee Sing Around the World, and others.

My all time favorite, though, was Wee Sing America, a collection of patriotic and folk songs. I loved the history, the stories, and of course, the music! What is really cool about it, is that they're all real folk songs. They may have been re-produced for a young audience, but they're still legit songs!

I've recently been searching for other versions of some of my favorite songs, and I thought I'd share them with you!
Revolutionary/Civil War
Yankee Doodle. I guess you can't get away from this one, and I don't really want to! It's pretty fun! This video is also cool, and it even has a little history lesson with it!
Dixie. I'm definitely not a Southerner, but I still like this song. It's so catchy! And this old recording is pretty awesome too.
When Johnny Comes Marching Home Again. Another classic song. This video has such awesome photos (and another history lesson). The first part is purely instrumental, but turns to singing around 2.20. I never knew that this song was actually about a Union soldier named Johnny, not Johnny Reb!
Railway Songs
Paddy Works on the Railway. I loved the old man voice that was on the Wee Sing tape, but this is a great version too.
Drill Ye Tarriers. This was one of my favorites of all! I would sing it when I was digging holes in my backyard (to make a pillhouse, of course). I often don't like live songs, but I like this guy. Also, fyi: tarrier was the nickname for the Irish immigrants who worked on the railroads.
John Henry. This was also a favorite of mine, and I learned all of the verses (in the Wee Sing book, at least). There seems to be a ton of different versions with varying tunes and lyrics. Here's just one (and I had trouble finding a version I liked), so look up some others to see the differences.
Well, I'll leave you with those for now. Next week, look forward to songs about settlers, pioneers, cowboys, and the like!
Posted by Lolai at 2:37 PM