Finally! I've made it to the LAST post about my Cambodia/Bangkok trip! This post, like the others, is very picture heavy and long.
We got up early (very early) to catch a bus back to Phnom Penh. A shuttle was supposed to pick us up at anywhere from 7:40 to 8:10 to take us to our bus which was supposed to leave at 8:30. We were ready by 7:40, waiting in the front of our guesthouse. And then we waited. And waited. Finally, around 9:10, our shuttle arrived which took us to our bus, which, in turn, left about 9:40. Well, that's Cambodia-time. The ride back was pretty uneventful except that someone put a motorbike in the bathroom. They couldn't fit it anywhere else, so they put its front tire in the bathroom and the back tire in the aisle. I promptly stopped drinking liquids, since we still had three hours until we got to PP.
We went swing dancing that night, which was fun. It's always nice to dance and meet new people. The next morning we went to a Christian cafe for breakfast. It was SO good! 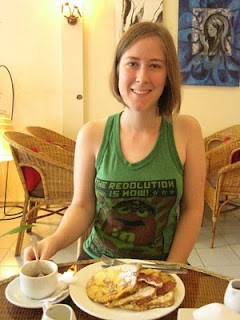 I had French toast and with bacon! I love bacon.
After breakfast we headed over to Tuol Sleng. We didn't have time to visit the Killing Fields, but Tuol Sleng gave us a pretty good idea about what went on. In the 70s, Pol Pot and his Communists took over Cambodia. They ended up killing off anyone who had any kind of education or knowledge. They killed and tortured teachers, professors, writers, engineers, mechanics, scientists, etc. Terrible stuff. I'm not going to go into a ton of detail, but I would encourage you to look into it further. 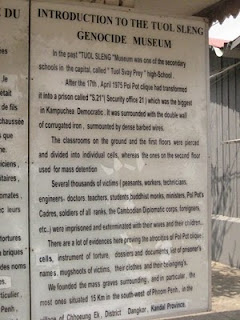 Hard to read, but you can try if you want. 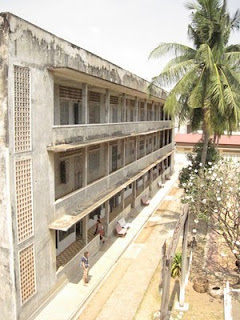 One of the school buildings that was converted into a prison/torture center. The people who survived here were sent to the Killing Fields where they were slaughtered and put into mass graves. 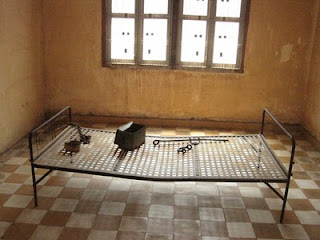 One of the classrooms turned cell with torture devices. 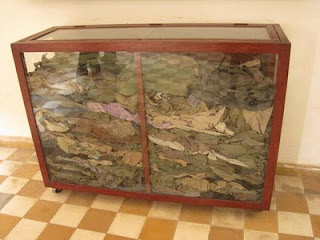 Clothes of victims.
In several rooms, all they had were rows and rows of pictures. They had mugshots of Communists as well as their victims. Their faces showed such a range of emotions: fear, defiance, anger, sadness, resignation. Words can't describe how sad it was to look at all of those faces. 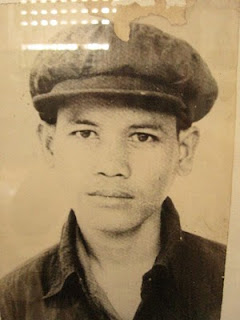 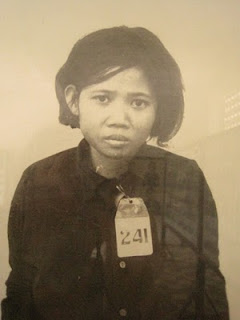 A prisoner.
After that heavy morning, we went to find the Daughters of Cambodia cafe. The girls we stayed with all work for the anti human-trafficking organization. This cafe gives rescued women a chance to work and support themselves. 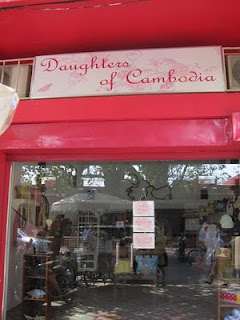 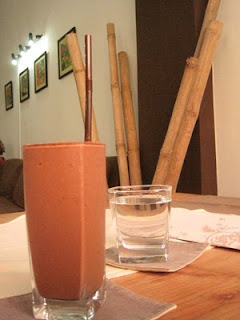 I think it was a banana mocha smoothie. I know it was good.
After wandering around the area, we headed back to the house. We needed to grab our bags and head to the airport. Unfortunately, when we got home, we were locked out! The girls inadvertently went out, leaving us stuck! We panicked for about forty-five minutes, trying to brainstorm alternate ways to get to Bangkok and home. Finally, some of them showed up and let us in. We raced to the airport and were relieved to make our flight. 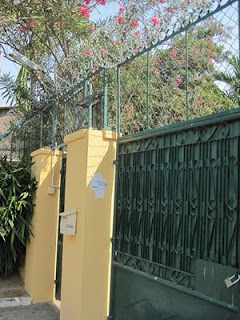 We became very well acquainted with their front gate. 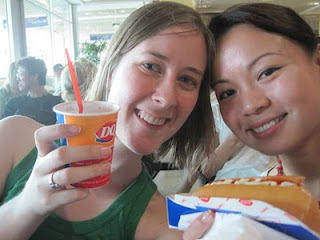 Since their security was such a breeze, we even had time to enjoy some Dairy Queen. I was pretty excited.
We arrived in Bangkok around six or so and went back to our hostel. We dumped our stuff and had a long conversation with a German girl who had studied in Georgia (the state). She had such an interesting accent! By that time we were getting hungry so we headed downtown to get some food. We met up with Peter again and just wandered around, talking and looking at things. We even got more smoothies! Peter grew up in the North of England, so he was amusing us with his thick (put-on) accent. We'd give him Spanish phrases and then he'd repeat them in his accent. So awesome! He kind of sounded like the barman from Lord of the Rings. He even taught Lillian and I a traditional greeting: "Ello, moi luvverrrrr." 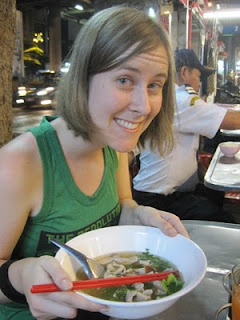 Delicious food at a nice little street stand. They're my favorite.

This was at our hostel--too funny! I have heard several Westerners swear that they'll never go back to toilet paper after using the butt-sprayer. 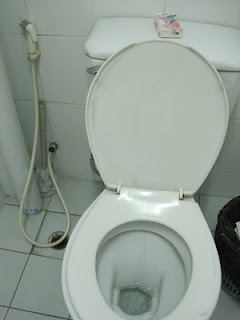 And there it is.
The next morning, Lillian and I went to a cute little cafe for mocha frappes and a chance to use their internet. 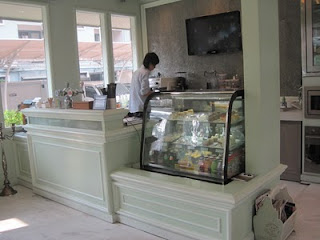 Pretty cute.
We then wandered down to Lumphini Park to try to spot some giant lizards! Unfortunately, they were all sleeping or something. I didn't see a single one. :( We did buy some brunch off of some stands near the park entrance. 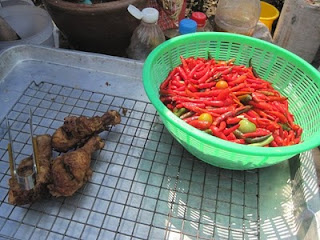 The fried chicken was very good. 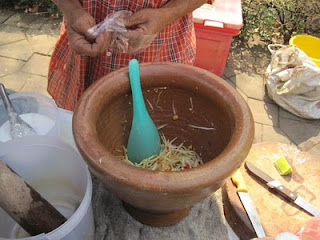 They mix the salads in these big bowls and then bag them in plastic for take-away. The salads are deceptively spicy. 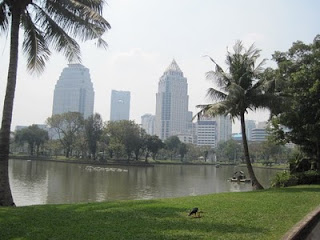 I didn't see any lizards, but I did spot some birds. I wasn't consoled.
By that time we were running a little late so we sped off to the airport. The train took longer than we had thought, so we were definitely late. The ticket counter had already closed, but the guy was nice and let us on anyway. Whew! Then all we had to do was relax, eat some food, and be carried back home. It was a good trip. 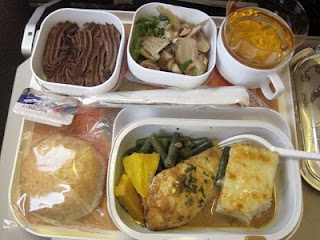 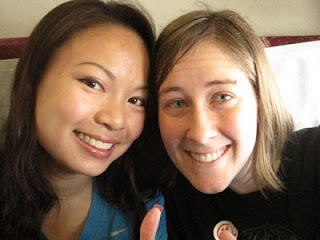 The tired travelers, homeward bound.
Well, if you've read all that, I congratulate you. It was quite the trip!
Posted by Lolai at 10:56 PM