Last week one of my customers at the cafe told me that this weekend was Anchorage's Fur Rendezvous festival.  I looked into it and it sounded great!  Apparently Fur Rondy, as it's called, has been around for a very long time and originated as a time for fur traders to get together and sell their wares.  These days it still has a fur element (many people wearing and selling fur) but seems to be more of a winter festival.   I had a thoroughly enjoyable time!

Nathan, Dan and I started the day off by breakfast at City Diner.  I've been looking at that building every time I drive by, so it was fun to finally eat there.  It was a cute, fifties-style diner, and we all ordered pancakes. 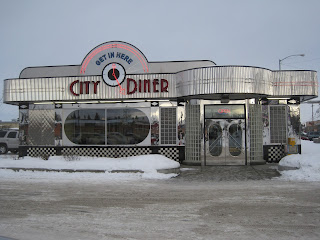 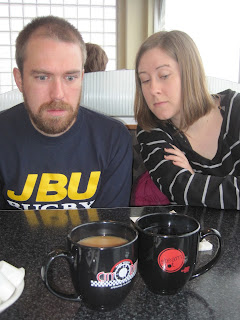 After breakfast we went downtown to catch the dogsled race.  I was surprised to see that most of the dogs weren't big huskies or malamutes, but little mutt dogs instead.  I was later told that the big dogs are for long races where they need endurance but the little dogs are better for short, sprint races.  It was fun to watch, but my feet got so cold standing in the snow. 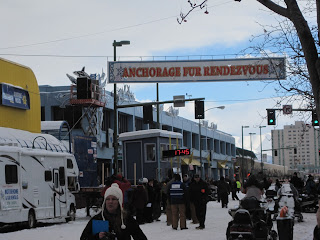 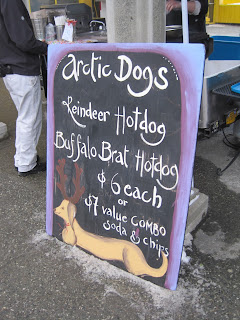 There were a lot of people selling food up and down the streets. 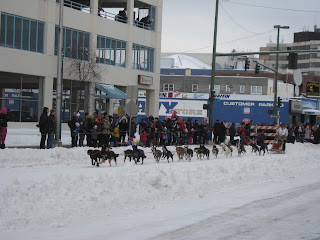 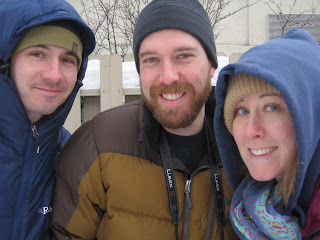 After the race we wandered down to the Railroad Station where they were having a miniature train show.  They had a bunch of different environments (if that's even what they're called) but my favorite one was the miniature Hogwarts.

Afterwards we wandered through the carnival and stopped to watch some of the fur auction.  Of course, the fur auction is how Fur Rondy got started in the first place.  While I'm not particularly interested in fur (although it does look super warm and fuzzy), it was still fun to watch the proceedings and the people in the crowd. 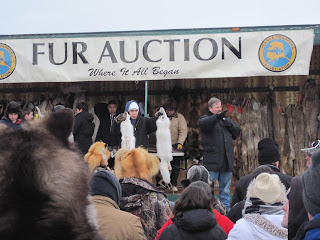 Can I get three hundred for the artic foxes? 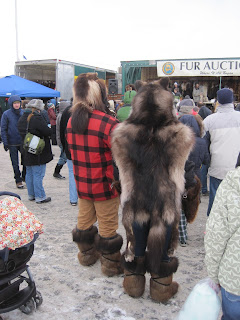 Many people were really into the Fur Rondy spirit.

We were a little cold at that point so we stopped in Sidestreet Espresso for a hot drink.  I really like Sidestreet.  It's very quirky and eclectic, and has apparently been around for twenty years.  The owner creates intense whiteboard special boards for their drink of the week.  He draws authors or literary figures or adventurers or musicians and has a quote included on the board.  They're awesome! 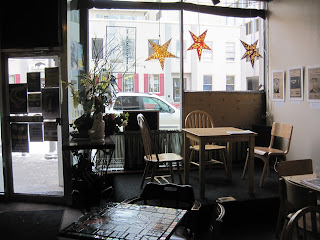 We walked around downtown some more, looking in different shops.  I stopped in the art fair to look around.  I found the original customer who had told me about the festival at a booth selling some of his handiwork.  After walking around for awhile, we were getting hungry so we stopped in a little hole-in-the-wall that sells pelmenis, Russian dumplings.  The owner was very friendly and chatted with us while he cooked us up some dumplings. 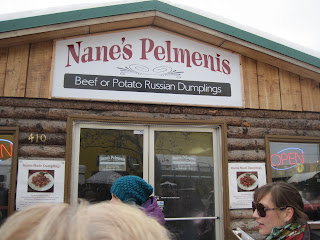 I had the potato and Nathan and Dan had the beef. 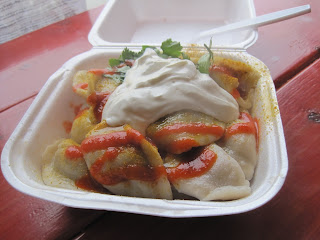 After filling up on delicious dumplings, we headed over to the the snow sculpting contest.  There were so many fun sculptures and it seemed like everyone was having a great time!

Near the snow sculpting area, they were having a snowboard/ski competition, so we went over to watch.  It was the first such competition I'd been to, and it was fun!  The one downside was that the competitors kept wiping out.  I'm no expert in the least, but it seemed as if something wasn't set up right.  Maybe the original ramp wasn't high enough or the angle of the slope was wrong or something, but it seemed like most of the skiers/snowboarders were having trouble.  Still, a couple of them managed some cool flips and stuff.  It was a good ending activity. 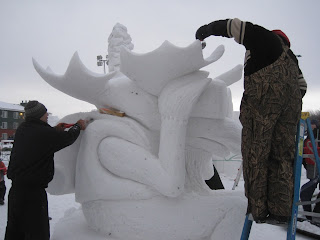 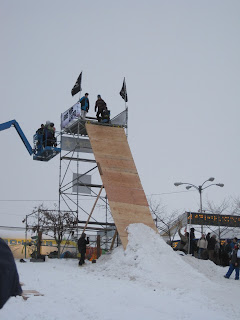 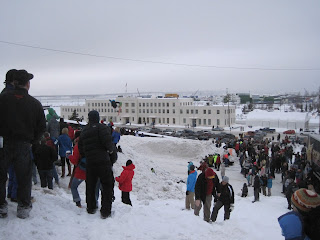 By that time we were tired and ready to go home.  As we walked back to the car, it started snowing, a lovely, soft snow.  Beautiful.